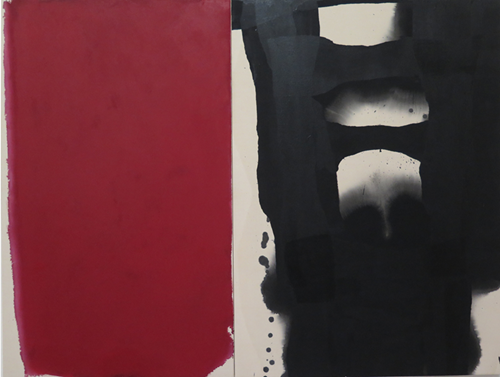 With a benchmark 6th exhibition with Galleri Andersson/Sandström, we are proud to present the pioneering British abstract painter Ian McKeever’s Paintings and Painted Panels. Two convergent series of paintings will be on display; Hours of Darkness – Hours of Light, and an ongoing series titled Henge. McKeever’s acute sensibility of light and space in painting will be on display in full force.

The Hours of Darkness – Hours of Light series was originally created by the artist in 2014 after he was invited to exhibit at Kunst-Station Sankt Peter, a large Jesuit church in Cologne, Germany. McKeever’s approach is experimental, exploring new methods to propel his senses deeper into the process of painting. For this occasion the artist choose to start with his own “abandoned” paintings. Taking fragments of those paintings, McKeever has re-worked and activated them by adhering them onto wooden panels. By reinvestigating these “abandoned” paintings he has changed their histories, and has created something quite new and beautiful. These panels are a result of McKeever’s persistent interest in what is possible with the surface of a painting, its ability to emit a presence of light or its ability to absorb it, hence the title Hours of Darkness – Hours of Light.

In McKeever’s Henge series, the artist reflects upon the architecture of Neolithic stone circles and earthworks found near his home in Southwest of England. These paintings, human size in scale, are composed as diptychs, with each half suggesting a physical weight or a lightness, an openness or a closed off feeling. Much like Hours of Darkness – Hours of Light, these works too investigate the relationships between light and surface. In these works there is a strong expression and understanding of a painting’s ability to suggest space and structure within its own medium. A wonderful thing happens when standing in front of these works; the layers and colors of the paintings shift in space, appear to inhale and exhale, and become transcendent.

McKeever has said “In painting a painting one does not set out to paint what one knows, but rather tries to touch those things which one does not know and which perhaps cannot be known”.

Ian McKeever, born 1946 in Withernsea, England, had his first solo exhibition at the ICA, London in 1973. Since then, he has had a rich presence in the arts both as painter, teacher and writer, exploring topics such as the light in Western painting and the contemporary status of abstraction. In 2003 he was honoured as member of the Royal Academy of Arts. McKeever’s extensive biography includes exhibitions at the Whitechapel Art Gallery in London, the New Carlsberg Glyptotek in Copenhagen, the Royal Academy of Arts in London and group exhibitions Dialogue at Moderna Museet in 1985 and British Art in the Eighties at Liljevalchs in Stockholm, Sweden, 1987. His works are incorporated in the collections of Tate Gallery, British Museum, Louisiana Museum of Modern Art, the Nordic Watercolor Museum, KIASMA and the Metropolitan Museum in New York.

Artcity21
21 June 2017
Wishing you a wonderful summer!
Jacob Hashimoto exhibition 2017, the Wäinö Aaltonen Museum of Art     "Some painters transform the sun into a yellow spot, others transform a yellow spot into the sun." - Pablo Picasso ...
7752 hits
0 comments
Read More