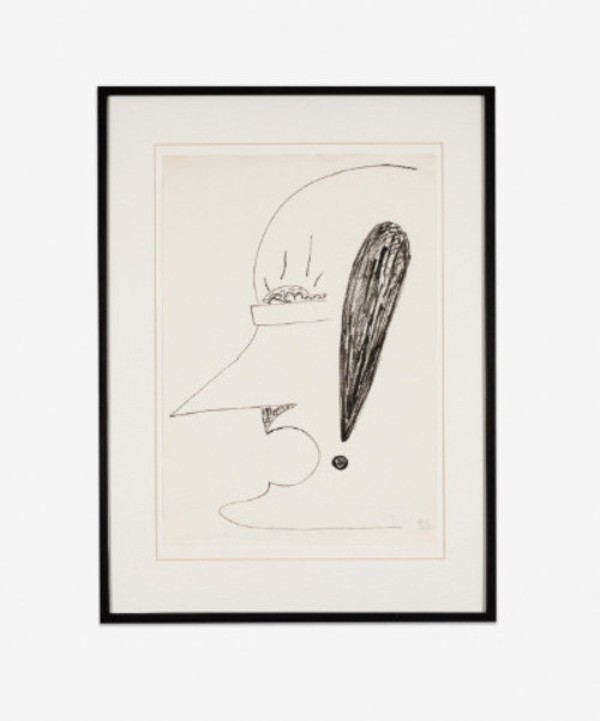 Meret Oppenheim’s first exhibition at Karma International, Zurich consists of works on paper ranging from ink and pencil drawings to collages, watercolours, etchings and lithographs. The exhibition traces her entire oeuvre: from the 1930’s in Paris until the 1980’s in Carona, Ticino. As a medium, drawing is at the core of Oppenheim’s practice that was to manifest in an immediate and experimental approach. Today her surrealist paper work is an influential role model for a young generation of artists who regards her drawings as a foundation for conceptual practice.

As a schoolgirl, Oppenheim famously wrote the equation “X=Hase” (X=rabbit) in her journal. Exhibiting her dislike for numbers, she simultaneously produced one of her first surrealist works of art. The sentence was later used in the publication "Le Surréalisme" and reproduced as the etching Das Schulheft, (1973). Oppenheim was an adept printmaker and drew extensively. Before her first painting in 1933, she had already created over 50 drawings. For Oppenheim, drawing allowed experimentation, quick notation, and an ease of mark making, which made it an ideal medium to access the subconscious and intuition – important elements of Oppenheim’s work.

Born in in 1913 in Berlin, Oppenheim spent most of her youth in Switzerland. She was introduced to many artists at a young age – including Emmy Hennings, Hugo Ball and Hermann Hesse, as well as Irène Zurkinden who took her to Paris as a young woman. Inspired by her father’s interest in Carl Jung, Oppenheim began recording her dreams at the age of fourteen. A series of reoccurring themes are continuously present throughout her work including investigations into the subconscious, humor, her relationship to nature and the universe, in effortless changes of style and method. Living in Paris in the 1930s, Oppenheim met many influential artists of the time, and worked closely with the Surrealist group surrounding André Breton. She returned to Switzerland before the Second World War, which, for Oppenheim, can be seen as marking the beginning of a long artistic crisis. She continued to produce art, but destroyed many works or left them unfinished. According to Oppenheim this crisis did not stem from criticism or a misunderstanding of her work, but rather a feeling of artistic incapacitation – the weight of centuries of discrimination against women resting on her shoulders – leading to an inherent feeling of inferiority. In the 1950’s she broke away from those doubts and created an incredibly rich body of work up until her death in 1985. In Switzerland she acted as a lively and social figure who inspired many generations of artists. Her studio house in Carona was an important meeting point where artists from all over Switzerland gathered with her.

Meret Oppenheim’s work has been exhibited extensively in museums including a reemergenent retrospective at the Moderna Museet in Stockholm in 1967. Since then her work has been the subject of large exhibitions at museums in both Europe and the United States, including the Guggenheim in New York City (1996), Martin-Gropius-Bau in Berlin (2013), the Kunstforum in Vienna (2013) and this year at the LAC Lugano. The MOMA New York acquired one of her most emblematic work: Object - her famous fur lined teacup.

Artcity21
16 July 2018
Antonio Pessoa - Soul Fire
There is an old saying that we can accomplish a lot if we "set our mind to it"... that is very true, and it particularly makes a lot of sense if we take as best example, the inner consistency,...
48993 hits
0 comments
Read More

Artcity21
30 March 2017
Antonio Pessoa - 1957 / 2012
PASSION PLAY By the time you finish reading this article, you'll discover Antonio Pessoa's secret to reaching the peak Art and Life performance level. This secret at this point of his life is respons...
100165 hits
0 comments
Read More

Artcity21
16 July 2018
Antonio Pessoa - Soul Fire
There is an old saying that we can accomplish a lot if we "set our mind to it"... that is very true, and it particularly makes a lot of sense if we take as best example, the inner consistency,...
48993 hits
0 comments
Read More

Artcity21
25 May 2017
Heartbeat - Antonio Pessoa
Life is not measured by the number of breaths we take, but by the moments that take our breath away. The artist's systematic visualization of a new- innovative contemporary communication outflow, is ...
30820 hits
0 comments
Read More

Artcity21
23 October 2017
Antonio Pessoa - Imagination
Throughout his Contemporary Fine Art odyssey, and very particularly when it comes to what absolutely involves the "Free" heart and soul, Pessoa describes commitment as everything that goes with it, Im...
30015 hits
0 comments
Read More