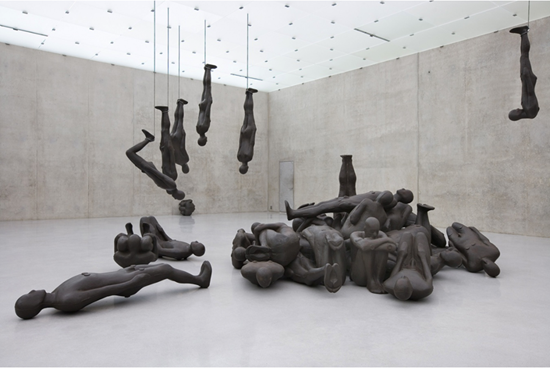 Galleri Andersson/Sandström is happy to announce Antony Gormley's solo exhibition STILL MOVING at the Long Museum in Shanghai. This is the first major presentation of Antony Gormley’s work in China. The center piece is Gormley's Critical Mass II (1995) an installation of 60 life-size cast iron body forms. 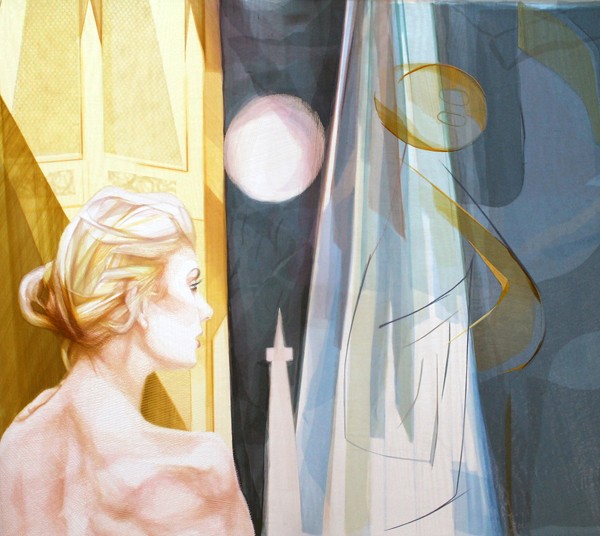 GALERIE SUPPER is pleased to announce its first participation at this year's POSITIONS Art Fair, which is centrally located at Arena Berlin during the Berlin Art Week. Within the context of international exhibitors with a focus on modern and contemporary art, we will be presenting selected positions and recent works from the gallery's program.

Monika Thiele's (b. 1966, Erfurt, lives and works in Baden-Baden) new thread paintings stand out through their special kind of luminance and intensity of colour. By the exclusive use of straight lines, the artist creates complex worlds with needle and thread. She weaves personal stories and cultural historical references into a dense net of associations and allusions. 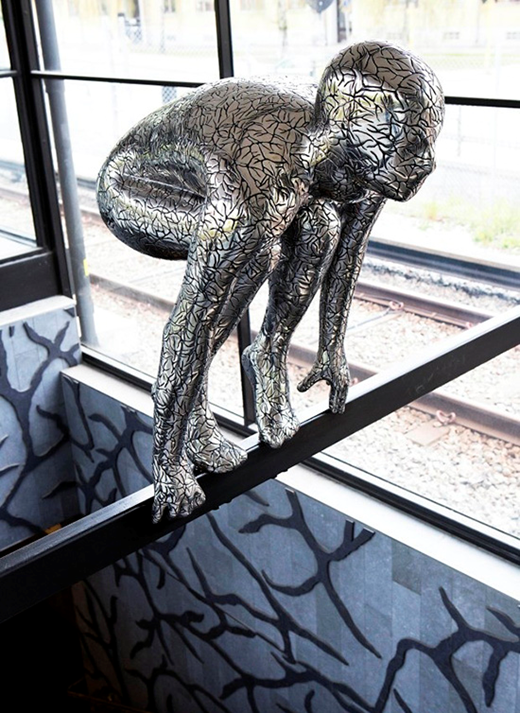 Galleri Andersson/Sandström starts the season with VIVA SCULTURA VIVA!, a tribute to the sculptural media. All of the contributing artists have a highly personal body of work that treats human existence as the everyday life, spirituality, the present and the passed, the relationship of the body to different forms of space, the psychological as well as the physical.

Sean Henry depicts anonymous people, the unglamorous, controlled, thoughtful and serious. Henry's sculptures are closing in on themselves, perhaps hiding something, and while their expressions often are ambiguous or difficult to interpret, they always have a tremendous psychological presence. And they are never quite like us - the proportions are shifted so that the characters are either too large or too small. "I try to depict some essential truths. My figures are often on the edge of action - passive, but acutely aware of their surroundings, as well as their inability to affect or change them." (Sean Henry)

After working mainly with photography Maria Miesenberger felt a longing for the three-dimensional which made her start with sculpture in the middle of the 1990s. In Moment in Motion, Holding On (2014), which you also can see in Enskede Gård’s metro station in Stockholm, the figure is holding on to the roof with a lean, strong, androgynous body as it’s constantly ready for whatever might come. The sculpture’s surface is covered with a relief pattern, like corneal nerve threads they form a sensible kind of bodily topography. The duality of it’s appearance is striking; strength and fragility in one, just as human life itself. 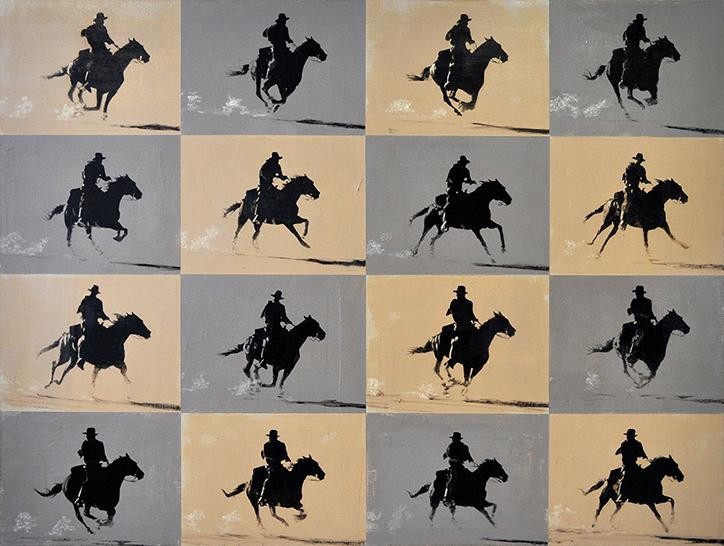 "My arrival in Montana in 1982 brought me into intimate contact with some of the most storied places of the historic West and also gave me the opportunity to study the paintings of two of the most influential codifiers of western imagery, Frederic Remington and Charlie Russell. I became aware of how decisive an effect their work, and the work of other western illustrators, had on the formulations of filmmakers like John Ford, William Wyler, and Howard Hawks. At the same time, I recognized how distinctly different the formalized imagery of western films, in its temporal, technological, and theatrical mediation, is from any painting."

Come see the interesting progression of Gordon McConnell's career in his upcoming show at Visions West, Bozeman, hanging from August 11th through September 19th. To see the works in the show click here For more information on Gordon's background as an artist, click here. 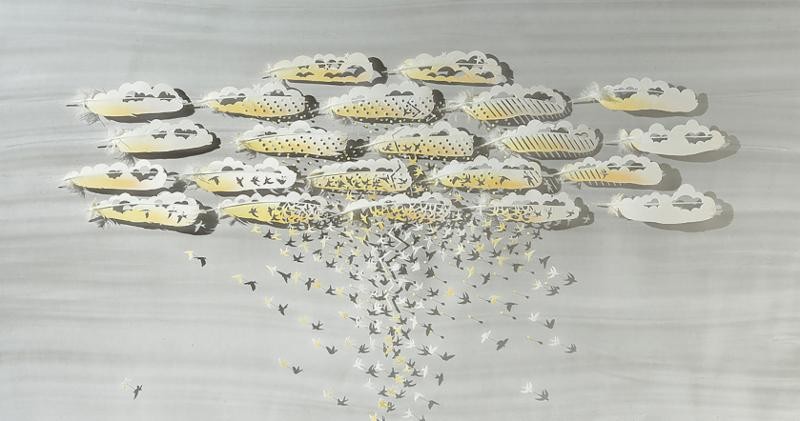 A Possible Explanation for the Appearance of Swallows,

Popular feather artist Chris Maynard's will be bringing his unique vision, in multiple new works, to Visions West Livingston for the August Art Walk.  The exhibition will open during the Art Walk on Friday, August 25th and will run through September 21st.

Chris will be in the Livingston gallery on Weds. Aug 22nd to sign books and visit with people about his unique work.

Using a tiny scalpel as his primary tool, Maynard carves birds out of feathers, then mounts his creations in shadowboxes, so that the carved feathers and feather birds cast shadows across the canvas just as real birds cast shadows across the landscape when they fly. His exquisite and imaginative compositions not only illustrate his background in science, and his ingenious technique, which he developed himself over many years, but show his aesthetic fascination with the "art" birds create--feathers. See more work here

Chris has been receiving much warranted national attention with his poetic and exacting pieces. To read a recent review in the Seattle Times click here and for his profile on our website, here. 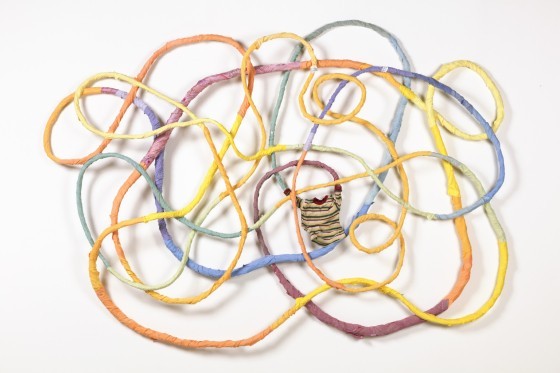 Used items of clothing convey an uncannily powerful sense of presence in the work of Kaarina Kaikkonen (b. 1952). The discarded clothing is highly personal and intimate, yet highly familiar and universal, holding memories and reminding us of time’s passage. Twisting playfully in mid-air, the interwoven clothing in her latest sculptures is a metaphorical depiction of life’s arc and time’s linearity. The works in her new exhibition mirror life’s vicissitudes with their varying body language and color schemes, yet even when at their most melancholy they always convey a ray of hope: joy and sunshine sprout forth from the unravelling sleeves of castoff jumpers. 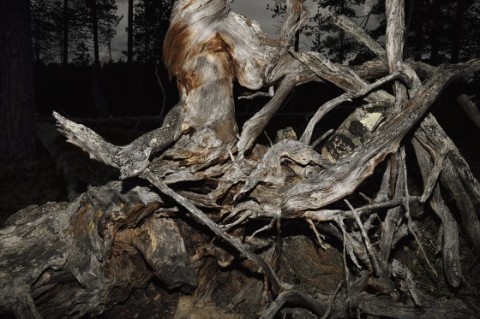 Esko Männikkö’s (b. 1959) photographs take us on a journey into the depths of the backwoods, featuring images of trees in remote regions beloved to the artist around Lake Inari and North Finland. Untouched by human hand, the wizened, contorted trunks offer a commentary on the wood processing industry and heavy-handed commercial harvesting. The trees portrayed in UUPUU are one-of-a kind, old elders, each one unique – as opposed to the uniformity of the young trees felled for commercial processing.