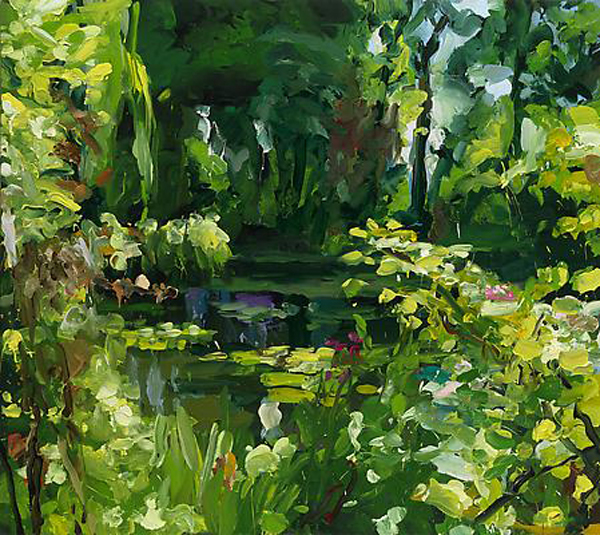 After a number of solo exhibitions at Angelika Knäpper Gallery, Lars Bohman Gallery

presents Jan De Vliegher’s exhibition SPRING. The Belgian artist Jan De Vleigehr, born 1964 lives and works in Bruges. He obtained his training at the Hoger Instituut voor Beeldende Kunsten in Gent in the beginning of the 1980's. De Vliegher´s work has been exhibited across Europe for example at the Museum van Elsene i Brussels and is included in several museum collections such as Museum voor Moderne Kunst (PMMK) Oostende and Stedelijke Musea Brugge, Belgium as well as in several private collections in Europe and USA.

The essence of Jan De Vliegher's painting is in that he reverses the basic principle of abstraction. If someone were to ask you to define modernism in one word, chances are you would give the right answer, which would certainly be 'abstraction'. This movement emerged at the beginning of the 20th century, although it began earlier in the nineteenth century. In 1810, Goethe published his ‘Theory of Colors’ describing the difference between warm and cool colors. Many scientific studies on color and form were then soon to follow. The general assumption was that colors held meaning, and were generally regarded as symbols for something else. People have believed since the origin of mankind that there was a kind of archaic language of color and aesthetic symbols must have some kind of psychological meaning. Physiology studied the effects of colors on the body. Linguists searched for syntax for color. Beginning in 1875, psychological experiments developed to examine how a person reacts to colors - whether he or she is attracted or repelled by any one color. But it was not until the start of the 20th century that the abstract movement took this knowledge and created abstract paintings. The founders of this movement were Kandinsky, Mondrian and Malevich. The basic principle of this modernism is that painting should neither mimic, nor express reality and that reality can be reduced to the relative proportions of colored forms. One of the characteristics of postmodernism is its reversal of this rule: postmodernism suggests that there is no need for abstraction. Postmodernism believes that there can be figuration in relative proportions of color forms. According to postmodernism, figuration is, in fact, always abstract, because its underlying aesthetic will - to a larger of a lesser extent – always be based on various kinds of proportions of color and form.

Figurative or not, Jan De Vliegher did learn from abstract expressionism, from Pollock’s drips, a high point in the freedom of painting, to the creative destruction of figuration, as demonstrated by Willem De Kooning, he learns from these great examples. Just so there is no misunderstanding: the grid-like spot patterns surrounding his figures are not technical errors, but a pictorial search for a new aesthetic, and a relation to the old one. To counter the habitual order of society he proposes a joyous, vivacious disorder, characteristic of a new society. He paints from the shoulder, a liberating technique that was transmitted from the lyrical abstractionists I mentioned earlier, and allows for greater expression than working
from the wrist. His dynamic energy precludes the patience to wait for one layer to dry before adding the next one. So he paints ‘alla prima’, wet on wet, like the innovative painters of Monet and Van Gogh before him. There is a sharp contrast between the rather strict aesthetic of old decorative pieces and his utterly free, possibly even frivolous, painting technique.

This is an extract from a longer text by Professor Willem Elias, V.U.B., Free University Brussels and Chairman of the Higher Institute of Fine Arts Flanders, Belgium

Artcity21
25 May 2017
Heartbeat - Antonio Pessoa
Life is not measured by the number of breaths we take, but by the moments that take our breath away. The artist's systematic visualization of a new- innovative contemporary communication outflow, is ...
30714 hits
0 comments
Read More

Artcity21
30 March 2017
Antonio Pessoa - 1957 / 2012
PASSION PLAY By the time you finish reading this article, you'll discover Antonio Pessoa's secret to reaching the peak Art and Life performance level. This secret at this point of his life is respons...
100039 hits
0 comments
Read More

Artcity21
16 July 2018
Antonio Pessoa - Soul Fire
There is an old saying that we can accomplish a lot if we "set our mind to it"... that is very true, and it particularly makes a lot of sense if we take as best example, the inner consistency,...
48891 hits
0 comments
Read More

Artcity21
25 May 2017
Heartbeat - Antonio Pessoa
Life is not measured by the number of breaths we take, but by the moments that take our breath away. The artist's systematic visualization of a new- innovative contemporary communication outflow, is ...
30714 hits
0 comments
Read More

Artcity21
23 October 2017
Antonio Pessoa - Imagination
Throughout his Contemporary Fine Art odyssey, and very particularly when it comes to what absolutely involves the "Free" heart and soul, Pessoa describes commitment as everything that goes with it, Im...
29903 hits
0 comments
Read More