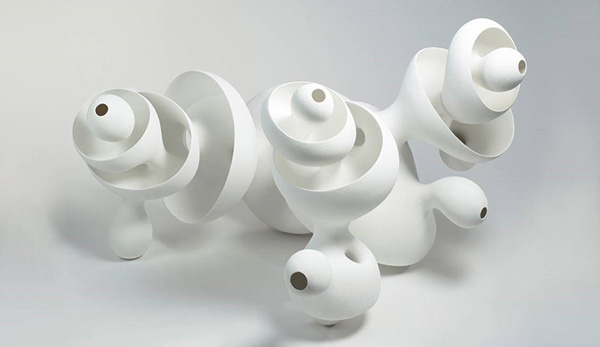 Galleri Andersson/Sandström proudly opens the 2016 spring season by presenting a solo exhibition by Eva Hild. With her characteristic organic forms, Hild has become one of the most successful sculptors of today. She has a strong position in the international art scene and she is represented in major private and institutional collections around the world.

Her sculptures are like cells exposed to pressure and movement. They are constructed by hand by using a thin layer of mud, but it is the voids and empty space in between that defines the contours of the mass. Hild’s unique technique uses the absence of material to define the impression presented. The outside as well as the inside are displayed and the very advanced forms express both fragility and incredible power simulateously. The abstract shapes move in and out of themselves, like a sea shell half worn down by waves. Although the sculptures can be characterized as voluminous, they likewise give a sensuous ease

"I examine the state of the objects. Openings that suddenly arise and lead forward. Movements and complex structures below the surface, a network of pillars, passage ways and inner rooms. In a slowly working process I let the thoughts and words transform into material. I have a dialogue with the shape, and its qualities fill in the story, extending it, letting it take other routes," says Hild.

Eva Hild was born in 1966 in Lidköping, raised in Borås and trained at the School of Design and Crafts in Gothenburg 1991-94, 1996-98 and at Gerlesborgsskolan 1994-95. She is represented at institutions such as the Museum of Arts and Design (New York), Museum of Fine Arts (Boston, USA), the Sèvres Ceramics Museum (Paris, France) and Shanghai Duolun Modern Arts Museum (Shanghai, China). In Sweden her works are represented in important collections such as National Museum in Stockholm, Borås Art Museum and Röhsska Museum in Gothenburg and she has received numerous awards, honours and scholarships both in Sweden and internationally.

Over the years, Eva Hild has completed public works on a large scale, such as the two-piece Binär; permanently placed outside the Government in Stockholm. In June 2015 an impressive, six metre high, white-painted aluminium sculpture named Rubato was inaugurated at the canal outside Malmö Concert Hall. In addition to many Swedish museum- and gallery exhibitions, she has also participated in a variety of high profile international exhibitions in cities like New York, San Francisco, Brussels, Istanbul, Paris, London, Rome, Tirana, Washington and Seoul to name only a few.

Her outdoor works are made of either bronze or aluminium, but the signature material that Eva Hild is primarily associated with is black or white painted stoneware: 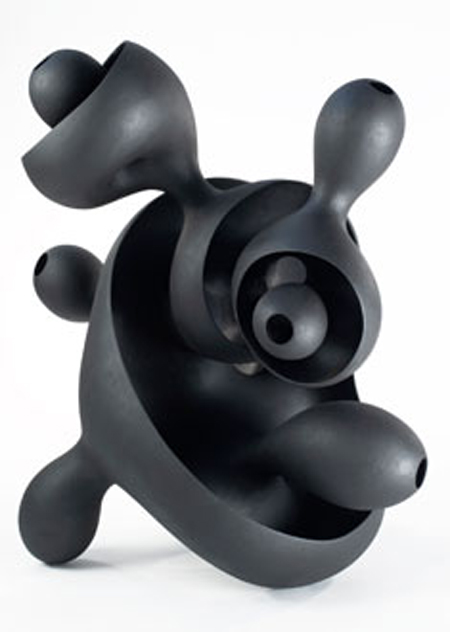 The time-consuming work starts with a small amount of clay formed into a thin-walled structure. Clay is added to clay and slowly a meandering sculpture gradually emerges, from the inside and out. When the shape is properly defined the clay gets to dry until it is possible to gently grind the material into its characteristically thin, soft and sweeping surface. Thereafter, the sculpture is burned twice and finally processed with pigmented colour.

In closing, Hild’s sculpturs’ appeal to the viewer is an interesting attraction that arises when taking a step to the left or right around any of her sculptures; thus offering a new point of entry.

"The experience of my life has given me feelings that I portray in these thin, shell-shaped volumes. A body, a thin shell that is branching, merging and forms rooms inside the room, holes in all directions." (Eva Hild, 2015)

High-resolution images are available at: http://www.gsa.se/artists/eva-hild/news/pressbilder