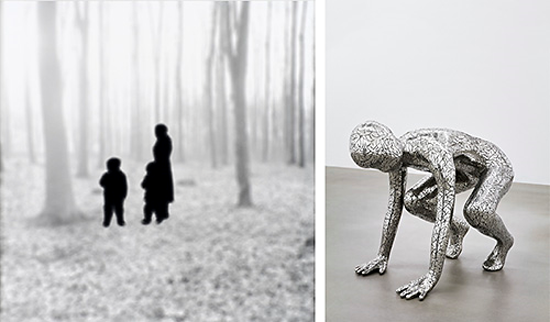 Maria Miesenberger (born 1965) is one of Sweden's most prominent artists in her generation. She works with photography and sculpture and explores existential subjects such as identity, body, memories and liberation, the private and the universal.

In one of her most famous projects Sverige/Schweden (1993-2000), awarded the Swedish Photo Book Award in 2011, she used her father's photo album containing snapshots that he took when she was a child. She photographed the images again and then blotted the people out with ink so that only blackened silhouettes remained; like vast projection surfaces open to the viewer's own thoughts, memories and experiences. A longing for working three-dimensional and controlling her own development made her start with sculpture, first in textile materials and later in aluminium, stainless steel, bronze and glass. The sculptures are often modeled after her siblings or own children and covered by a relief pattern, such as in Stilla Rörelse/Standing Motion (2012) or Change of Direction (2015) where the corneal nerve threads form a kind of bodily topography.

Miesenberger was born in Lund, Sweden in 1965 and currently lives and works in Stockholm. She has studied photography and painting at Konstfack, Stockholm and sculpture at Parsons School of Design in New York. Between 1995-2003 she lived and worked in New York, USA. Maria Miesenberger has exhibited in numerous galleries and institutions in Sweden and abroad including Carl Eldh´s atelje, Stockholm, Sweden 2017; Läckö Slott, Lidköping, Sweden 2016; Moderna Museet, Stockholm, Sweden 2014 and Robert Mann Gallery, New York, USA 2003. Her works are included in public collections such as those of Moderna Museet, Hasselblad Foundation, Malmö Konstmuseum and the Public Art Agency in Sweden.

Miesenberger has frequently worked with public art, recent projects include the installation Reflection on the Precense of Time in Norrköping, Sweden, Moments in Motion at Enskede gård metro station in Stockholm, Sweden and an 8 meter high sculpture titled Half an Angel at Telenor Headquarters in Fornebu, Norway.

Monika Thiele at the German Textile Museum
NEWS: Lifetime Achievement to Lynda Benglis and To...

Artcity21
30 March 2017
Antonio Pessoa - 1957 / 2012
PASSION PLAY By the time you finish reading this article, you'll discover Antonio Pessoa's secret to reaching the peak Art and Life performance level. This secret at this point of his life is respons...
100165 hits
0 comments
Read More

Artcity21
16 July 2018
Antonio Pessoa - Soul Fire
There is an old saying that we can accomplish a lot if we "set our mind to it"... that is very true, and it particularly makes a lot of sense if we take as best example, the inner consistency,...
48994 hits
0 comments
Read More

Artcity21
25 May 2017
Heartbeat - Antonio Pessoa
Life is not measured by the number of breaths we take, but by the moments that take our breath away. The artist's systematic visualization of a new- innovative contemporary communication outflow, is ...
30821 hits
0 comments
Read More

Artcity21
23 October 2017
Antonio Pessoa - Imagination
Throughout his Contemporary Fine Art odyssey, and very particularly when it comes to what absolutely involves the "Free" heart and soul, Pessoa describes commitment as everything that goes with it, Im...
30015 hits
0 comments
Read More