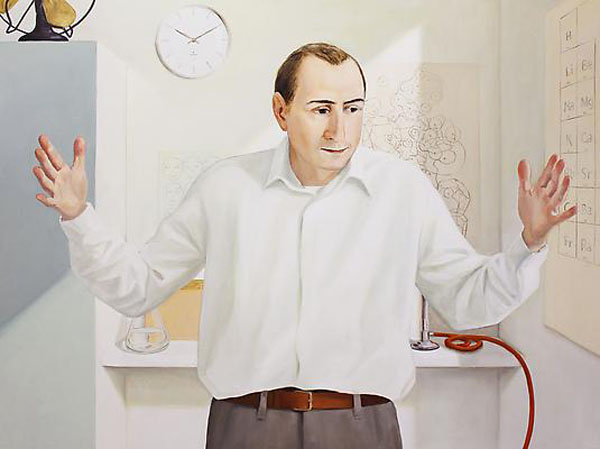 Lotta Hannerz was born 1968 in Stockholm, Sweden and lives and works in Paris. Hannerz has attended the University College of Arts, Crafs and Design in Stockholm and the Royal Institute of Art in Stockholm. She graduated in 2002.

In the beginning of the 2000s Hannerz made several water sculptures, which have been on display in various locationas, such as in the water outside of the Royal Palace in Stockholm. Hannerz has participated in a number of exhibition both in Sweden and aborad, for example at Nationalmuseum, Stockholm and in the Luxembourg Gardens in Paris.

Andy Warhol once said, “Nobody really looks at anything; it’s too hard.” I think he solved this problem by making a movie that constantly showed the same view of the Empire State Building, forcing the audience to sit staring at the same building for more than eight hours!

“Surely nothing has to listen to so many stupid remarks as a painting in a museum,” alleged the Goncourt brothers. Perhaps this is true not only of what is said but of what is written about art. As an artist, I have often heard from colleagues how art critics don't see what they are doing but instead write that their works remind them of some other artist’s work, or simply repeat what someone else already wrote about their art. However, in these financially difficult times for the newspaper industry, art criticism tends to be reduced to verdicts in the form of one to six dots, which, ironically, gives the impression of a random throw of dice.

I would nevertheless like to emphasise that I do not believe that artists are better judges of art than anyone else. In my experience, most artists don’t actually care much for other people’s art. Furthermore, many of the good artists I know are uninterested in the very concept of art.

One thing I feel safe in saying about the artist Lotta Hannerz, however, concerns not the artistic form but the actual contents of her works. Unlike, say, Auguste Renoir, who painted his sensual women over and over again, some artists have a pronounced antipathy to repeating themselves. I myself am one of them. Everything we do is a portrayal of something we want to express once and for all. Lotta Hannerz, I believe, belongs to this group.

Bearing in mind what the Goncourt brothers said, I will limit myself to what is indisputable in Lotta Hannerz’s oeuvre. She has embarked on a series of expansions in the field of art, for instance her water sculptures, where she has solved the problem of creating movement in art by anchoring her objects in the undercurrents that make them move; she has created a collapsible sculpture that can be tucked into a small case; she has made two-dimensional sculptures, she has utilised our habitual way of seeing perspective to conjure up virtual rooms with a cut-out method; she has invented something she calls polyview – i.e., three double-sided tall pictures that describe a spatial relationship that sets the viewer’s head spinning – and she has used a technique for three-dimensional drawing with metal thread, and so on. Moreover, she has made drawings under hypnosis, revealing that there is an antagonistic relationship between the right and left halves of the brain!

But, as Paul Valéry once wrote: “An exclusive preference for all that is new and only new indicates a deterioration of critical discernment, for nothing could be easier than to discern the ‘novelty’ of a work.” However, we could add to this George Christopher Lichtenberg’s observation: “One has to do something new in order to see something new.”

I could also add that it seems to me that Hannerz often visualises the duality of many of our notions. Her works may appear realistic, but many of them seem to contradict this, which she now and then emphasises by using, for instance, trompe-l’oeil technique to remind us of the deceptiveness of some of our perceptions. It appears to me... I experience many of her works differently depending on the day. A one or a bull’s eye are just two aspects of a throw of the dice. Just look at her sculpture “21 degrees”.

Here, I cautiously pause to quote Lotta Hannerz herself: “I would prefer you to see rather than read." Thus, I end my writing by recommending you to fulfil her request.

Artcity21
30 March 2017
Antonio Pessoa - 1957 / 2012
PASSION PLAY By the time you finish reading this article, you'll discover Antonio Pessoa's secret to reaching the peak Art and Life performance level. This secret at this point of his life is respons...
99635 hits
0 comments
Read More

Artcity21
16 July 2018
Antonio Pessoa - Soul Fire
There is an old saying that we can accomplish a lot if we "set our mind to it"... that is very true, and it particularly makes a lot of sense if we take as best example, the inner consistency,...
48466 hits
0 comments
Read More

Artcity21
25 May 2017
Heartbeat - Antonio Pessoa
Life is not measured by the number of breaths we take, but by the moments that take our breath away. The artist's systematic visualization of a new- innovative contemporary communication outflow, is ...
30344 hits
0 comments
Read More

Artcity21
23 October 2017
Antonio Pessoa - Imagination
Throughout his Contemporary Fine Art odyssey, and very particularly when it comes to what absolutely involves the "Free" heart and soul, Pessoa describes commitment as everything that goes with it, Im...
29561 hits
0 comments
Read More