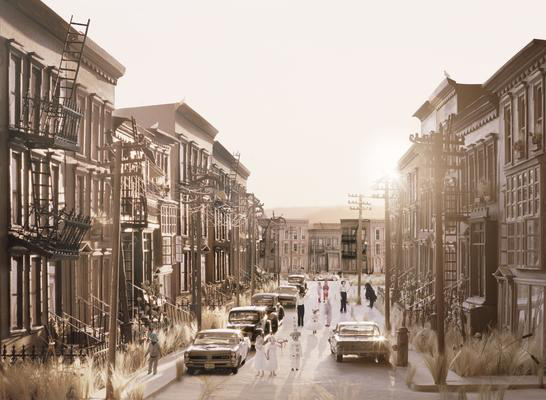 With an infallible sense of hues and lighting, together with a meticulous craftsmanship, the scenography is made co-star next to the lead, Florentine Stein. There is a touch of melancholy inherent to Florentine, a suite of new works by Helena Blomqvist. The subdued palette that brings late 19:th century Scandinavian painting to mind enhances the sense of melancholy. We are guided by a loosely knitted narrative through the memories and recollections of the former ballerina. The past appears as vivid as the present. How certain can we be that what we are looking at is the actual recollections of Florentine? Would it be truer to describe what is in front of us as the tangled up truth, as it looks through the filters of time and imagination?

The resplendent melancholy visible in the eyes of Florentine turns to deflection in the wider perspective of our contemporary history. The cataclysmic occurrences that are noticed among the headlines in the stacks of yellowed newspapers could be read as references to Blomqvist's earlier body of work. With these shared experiences as backdrop, the personal history of Florentine is set in the foreground. Here we are confronted with more personal, yet common, existential matters, as ageing and loneliness.

Early impulses to the artistry of Blomqvist might be found in resent photography history among names as Christer Strömholm, Richard Avedon and Cindy Sherman. These names were an introduction to photography as an artistic media. It might be said that it is something significant to Blomqvist’s artistry that can be found in the scope, or possibly more correct; in the contrasts represented by Strömholm and Sherman. Where Sherman represents a highly conceptual and staged approach to photography, Strömholm is considered the most prominent figure in a documentary tradition that for many years - not to say decades - held a distinguished position in Swedish photography. A tradition that has fostered names such as Anders Petersen and JH Engström – also a tradition that several photography based artists from Blomqvist’s generation have revolted against in attempts to move away from a strictly documentary stance. In Blomqvist's artistry these opposites entwines. Through allusions to the real world, the documentary is accommodated in fantastical sceneries.

Works by Helena Blomqvist are included in the collections of Moderna Museet, Stockholm, Sweden; the Hasselblad Foundation, Gothenburg, Sweden and at Borås Konstmuseum, Borås, Sweden.

Artcity21
30 March 2017
Antonio Pessoa - 1957 / 2012
PASSION PLAY By the time you finish reading this article, you'll discover Antonio Pessoa's secret to reaching the peak Art and Life performance level. This secret at this point of his life is respons...
99137 hits
0 comments
Read More

Artcity21
16 July 2018
Antonio Pessoa - Soul Fire
There is an old saying that we can accomplish a lot if we "set our mind to it"... that is very true, and it particularly makes a lot of sense if we take as best example, the inner consistency,...
48360 hits
0 comments
Read More

Artcity21
25 May 2017
Heartbeat - Antonio Pessoa
Life is not measured by the number of breaths we take, but by the moments that take our breath away. The artist's systematic visualization of a new- innovative contemporary communication outflow, is ...
30243 hits
0 comments
Read More

Artcity21
23 October 2017
Antonio Pessoa - Imagination
Throughout his Contemporary Fine Art odyssey, and very particularly when it comes to what absolutely involves the "Free" heart and soul, Pessoa describes commitment as everything that goes with it, Im...
29451 hits
0 comments
Read More