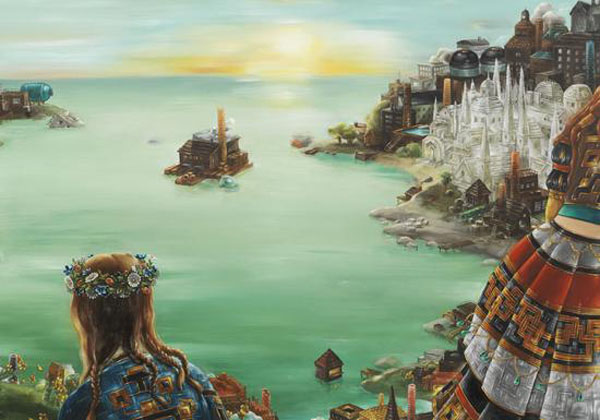 There are many reasons for experimenting or playing with your name or your brand. Writers like to use a pseudonym when they change genres– in earlier times to hide their identities, nowadays in the hope of creating speculation about who is hiding behind the mysterious name before the great revelation. […]

Ernst Billgren has always been playing with his identity. The artist is a very public figure but in fact he is not very personal and has repeatedly talked about his media persona as an avatar. Maybe the temporary name change could even be seen as something of an explanation, or in any case a clarification. […]

Naturally, there could be many reasons why Billgren appears as Wilhelm von Kröckert. But one of the obvious ones is that he wants his paintings, at least initially, to be met without the expectations that are connected with the character “Ernst Billgren” – the celebrity who sprinkles aphoristic ambiguities everywhere, the Postmodernist who loves foxes, the restless jack of all trades who rebels by refusing to rebel and simultaneously has demonstrated that the male genius in the history of art is not at all a thing of the past but very admissible on any number of fronts. The name change may even be a step away from the smart one-liners. […]

Of course the central question is why Billgren chooses to represent himself by another name, and what consequences this has for the way we look at the pictures. That it must have some kind of effect is undeniable. We inevitably read the artists’ names when we look at art. Especially if we know them. A stylized grove of trees is experienced very differently if it the artist is Karin Mamma Andersson or a student at the Institute of Art. Similarly, we perceive a picture of a soup can as an art historical comment or a pastiche if the instigator is somebody other than Andy Warhol. […]

The continuous expansion of his artistic production that is characteristic of Billgren depends to a great extent on his willingness to try new ideas while maintaining his established expressions. From this perspective the sudden name change follows a straight line in a production in which the artist habitually explores the conditions of the medium and looks for new and varied approaches. Usually with quite limited means. […]

In light of the customary doubleness one can see Wilhelm von Kröckert as a logical continuation of an older work and not as a reboot. The name game and the pictures that follow could be seen as a belated incarnation of the East Frisian church painter Ernst Wilhelm who was the protagonist in the novella the artist published instead of a conventional catalogue in connection with an exhibition at Galleri Lars Bohman in 1998.