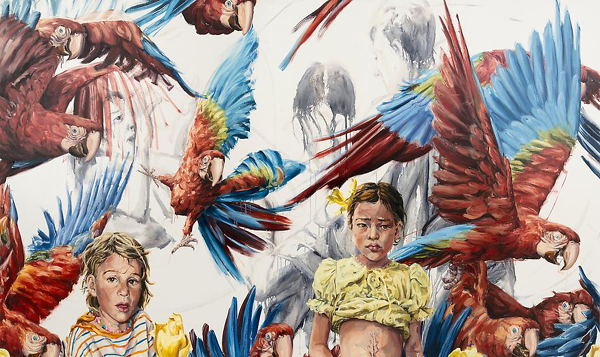 Linn Fernström’s fifth exhibition at Lars Bohman Gallery will be the opening show for autumn 2014. The works exhibited in this show encompass both paintings and sculptures, and are produced between 2008 and 2014.

The artistry of Linn Fernström is immediately recognisable and in constant flux. The art is characterized by consistency, yet in continuous change. She has shown courage to challenge her technical brilliance, as her familiar naturalistic sceneries now are replaced by sketchy, subtly expressive settings. This has enabled her technique to develop in new ways.

Linn Fernström visited New York during her years at The Royal Institute of Arts. As she kept returning to the city, she pondered on the impact such an environment could have on her art. Is it the impact from these surroundings that is visible in her new works? With a more pronounced separation between foreground and background, where the latter could be described as executed in a flowing, painterly grisaille technique. The semi-transparent colours flow in thin gushes, reminiscent of works by Helen Frankenthaler, and contrast the more naturalistic foregrounds with their bold colours. The fields occasionally painted on the verge of the abstract. At other times the grey hues are abandoned for words and fragments of text to take place. Randomly splattered across the canvas in intense colours.

The figures that are associated with Fernström’s earlier works are still present. They guide us into the painterly dream world, connected to art historical references yet linked to a private, personal mythology. But the motives also escape the two-dimensionality of the paintings, and reach out into the gallery space. The iconography and intimacy of the sculptures cautiously interpreted in bronzes by Bergman’s Konstgjuteri.

Linn Fernström has held several solo shows, among them at Eskilstuna Konstmuseum and at Maniero Associazione Culturali, Rome, and has participated in group shows, such as Absolute Generations in Venice, Italy and at Yunnan Art Institute, Kunming, China. Fernström is represented in several public and private collections, among them Moderna Museet, Stockholm and The Bonnier Collection, Sweden.