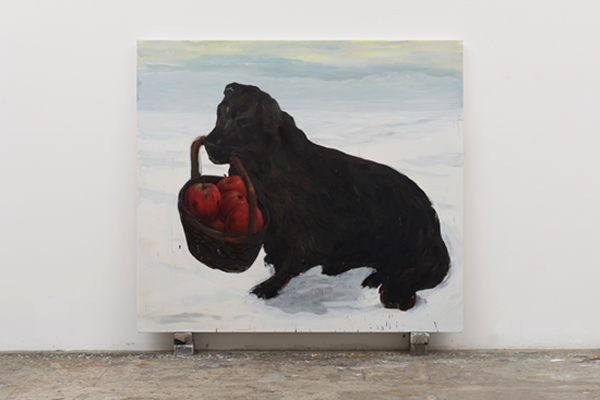 Galleri Andersson/Sandström is proud to present the third solo exhibition of Enrique Martínez Celaya’s work, The Other Life. In this exhibition – which features eight paintings and five works on paper – Martínez Celaya reflects on inevitability, tragedy, and loss in a way that does not discount hope, but places it out of reach. The title of the exhibition suggests the enigma of life’s singularity, and invites thoughts of another life – one parallel to our own and emerging from the choices we did not make.

The new body of work presented in the exhibition features allusive and archetypal imagery – a basket of apples, fields of grass, flooded waters – symbols and landscapes that connect the work to what Martínez Celaya has previously done. However, the emotional register in these works confronts more starkly than before despair, loss, and loneliness against tenderness, redemption, and love. For Martínez Celaya, the capacity of painting to create meaning depends on the instability between the references in painting and its materiality, between what it brings forth as idea, dream, or invocation, and its factual condition as object and reservoir of work.

Since the early 1990s, working in a variety of media including painting, sculpture, and installation, Enrique Martínez Celaya has created an extensive oeuvre characterised by metaphorical complexity. He blends fantasy, reality, and memory to create a poetic world that is both semi-autobiographical and resonantly universal. His art, as Martínez Celaya describes, is a rescue ship, where its ever shape-shifting appearance depends on what we lack and what we long for.

In his works the artist embarks on the human condition in relation to time and nature. Upon reading the writing of the Swedish author and Nobel Prize winner Harry Martinson, Martínez Celaya found his own way to use nature in his work. "Harry Martinson makes very vivid observations; it is easy to see what is sadness in a person's life, but I find that there is also a salvation in really observing – to really watch the buds in nature or the ball of dandelions not yet open – and rest in that experience."

Enrique Martínez Celaya (b. 1964) is a trained artist and physicist, and he is the author of numerous books and essays on art, poetry, philosophy, and physics. Martínez Celaya has exhibited throughout the United States and internationally. His work has been presented at The State Hermitage Museum, St. Petersburg; The Phillips Collection, Washington DC; and Museum der bildenden Künste Leipzig, Germany. Martínez Celaya has had numerous gallery exhibitions and exhibited his work outside the art world at institutions such as Berliner Philharmonie, Berlin; and the Cathedral Church of Saint John the Divine, New York. Works by the artist are included in private and public collections, such as the Metropolitan Museum of Art, New York; Los Angeles County Museum of Art; Whitney Museum of American Art, New York; Museum of Fine Arts, Houston; Wadsworth Atheneum Museum of Art, Hartford; and Moderna Museet, Stockholm. Since 2017 he is Provost Professor of Humanities and Arts at the University of Southern California, Los Angeles.

Artcity21
30 March 2017
Antonio Pessoa - 1957 / 2012
PASSION PLAY By the time you finish reading this article, you'll discover Antonio Pessoa's secret to reaching the peak Art and Life performance level. This secret at this point of his life is respons...
100000 hits
0 comments
Read More

Artcity21
16 July 2018
Antonio Pessoa - Soul Fire
There is an old saying that we can accomplish a lot if we "set our mind to it"... that is very true, and it particularly makes a lot of sense if we take as best example, the inner consistency,...
48858 hits
0 comments
Read More

Artcity21
25 May 2017
Heartbeat - Antonio Pessoa
Life is not measured by the number of breaths we take, but by the moments that take our breath away. The artist's systematic visualization of a new- innovative contemporary communication outflow, is ...
30670 hits
0 comments
Read More

Artcity21
23 October 2017
Antonio Pessoa - Imagination
Throughout his Contemporary Fine Art odyssey, and very particularly when it comes to what absolutely involves the "Free" heart and soul, Pessoa describes commitment as everything that goes with it, Im...
29860 hits
0 comments
Read More